“Did you enjoy yourself, dear?” The mother asked as her young son skipped up to her. He had been playing in the park, so she was expecting to hear tales of the various swings and roundabouts.

Instead, he surprised her by telling her that he had been sitting on the red bench. “I met somebody very interesting. She wasn’t playing, though, so I thought I would sit with her and watch people.”

“Was she unwell?” Sophie had to admit, she had never felt so proud of her son as she did at that moment. To think he had let playtime go past so that another child did not feel alone. She reached out her hand to ruffle his blonde hair.

Richard shook his head. “I don’t think so. I am not even sure that the other children even noticed her. I don’t know how they missed her, because her clothes were really really unusual.”

“What do you mean unusual?” Now the thought of an abandoned child was running through Sophie’s mind. She found herself peering around the place that she knew her son had just appeared from. “Like, dirty?”

“No… I mean yes. I don’t know, just like nothing I have seen before. She just wasn’t like the other children.”

Sophie was looking, but she could not see anything like what Richard was describing to her. “Did she go?”

“Her name is Victoria. Mummy, do you think we will be able to invite her round for tea sometime? I really enjoyed talking to her.”

“Of course we can.” She squeezed Richard’s hand. “You can ask her whenever you like.”

He jumped up and down with excitement. “Great, because she is standing in the gateway waiting to see what you said.”

She looked at the gate but there was nobody there. She frowned down at Richard thinking he had played some kind of prank on her. He was standing waving at the bunch of nothing with a smile that split his face. His pupils remained fixed on something, although Sophie could see nothing but air.

A sudden giggle forced its way from between her lips. Victoria was just a harmless imaginary friend. Sophie gave a slight smile as she remembered her own childhood friend of Amber. The memory of her even gave way to the sight of her face. Even when she blinked to remove the image her face stubbornly swam in front of her eyes and sprouted into a fully formed figure standing before her. In confusion, she stretched out her fingers to touch the air and was momentarily surprised when her fingers brushed against solid skin.

“Mummy, this is Victoria, what are we going to have for tea?”

Sophie blinked again but found that she could only see Amber who she knew was imaginary. Wasn’t she? Her son was looking in a different direction so she dutifully looked towards the air and smiled. “Hello, Victoria.”

Her face snapped round to regard her childhood friend. She mouthed the word ‘what?’

“You stopped believing in me. But, I can’t let you be bothered by an evil spirit. Victoria… Bad!”

She had always trusted what Amber had told her, so she grabbed her son by the hand and ran from the playground. Sophie knew that at some point she would have to try and explain herself to Richard, but it wasn’t yet, so she had time to think of something. 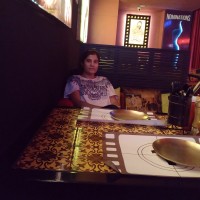