Is is my response to this week’s flash fiction for aspiring writers prompt. In this prompt you are given a picture and asked to write a small piece of fiction inspired by the image.

This week’s image is as follows: 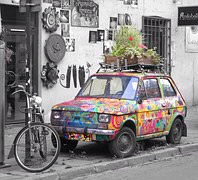 “Right, that’s it!” Nicola undid her seatbelt and stormed out of the car. “Marvin, you are really not a good driver. Stop reversing into parking bays, because you just cannot reverse!”

From the pavement the young woman glared into the coloured car. “You might want to look at your own rooftop before you go making a comment like that.”

When he reached the privacy of his own driveway, Marvin noticed that a window box had neatly landed on his roof after he had reversed into a wall. He began to laugh as he saw the point that Nicola had been making.

Well, at least he had flowers to give her when she got there!

Bringing Happiness to Your Home

Book reviews by teens, for teens!