This is the story of the young woman who is just out of training school to be a constable. She has an ability which she described as seeing, although what this actually means is that she is able to see things on a crime scene, or on an individual, that anyone will be able to notice given time. Kiera is able to notice these things at an incredible speed, without actually thinking about it.

She believes that it is partly due to this that she is posted in a remote location called The Ragged Cove. A number of officers have been posted there before but they have all deserted their post, or simply gone missing. Kiera does not pay any attention to this, but accepts the position and moves out there.

On arrival, she discovers that it is a very strange place and is cut off from the rest of the world as phones do not work, landlines or mobiles, and neither does the radio. When she arrived she instantly gets lost and ends up at the police station to try and find her way. Inside she meets her new work colleagues, and instantly decides she dislikes one called Potter. However, there is one man called Luke that she feels an instant connection with, and is more than happy when he agrees to take her to her accommodation. She is surprised to find herself called out to the scene of the murder first thing that evening. She also discovers that the nightshift is called the vampire shift.

The whole book is based around a series of events that occur within The Ragged Cove, and involves the various residents. She uncovers a dangerous world of vampires, and vampire bats.

It is very well paced, and definitely keeps you turning the pages to find out more about what is going on. You never find out what is so special about Kiera. Mind you, because it is part of a series I would not expect learn absolutely everything in that first book. It definitely leaves you wanting more and I will probably find myself looking for the next in the series at some point.

I enjoyed the new elements that were given to the whole vampire mythology by this writer, and I will definitely check out more of his work in the future. I gave this four out of five stars, and would definitely recommend it to others. 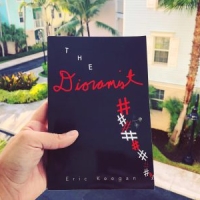 Pages are always blank before the words get laid out.

Stories and photos from Scotland

Everything in One Place

We do not remember days — we remember moments.

Musings and books from a grunty overthinker

Movies Review in the Hindi Language

Best Robot Vacuum For You

Vibe alone for a while

Experts Helping You Build Your Fortune

Increase The Level Of Energy With High Vitamin Sport Nutrition

Aspiring to be the best at writing. Poetry lover, haiku and free verse to be precise, I hope to one day master