I was only there for the two days, and not the originally planned three. It is amazing that you can plan something so far in advance, and then just watch everything go wrong so your plans turn to shit! So, yes, originally I had booked this for the three days and expected to be there for every single one. However, circumstances beyond my control and all that jazz meant that I was there Saturday and Sunday only.

I do not stay at the festival, but as it is only at Donnington I travel there every day that I am going. This being the case, I am not there at the start of the festival. It is only recently that it is started earlier in the day, as it always used to be lunchtime. So, I am always resigned to missing the first couple of bands.

On the Saturday I arrived in time to see Mallory Knox on the main stage. I wanted to see them because I have only recently discovered them, and found that I really enjoy their music. The way that I discovered them is completely random, I actually got sent two tickets to go and see them that were in somebody else’s name. This being the case, I did not pay but did not want to pass up the opportunity of going to see some live music. They were as good on the stage at download as they were when I saw them in a small venue. I really enjoyed seeing them again.

My original plan was to head over to the zippo encore stage to watch Apocalyptica. However, I realised that I was at the front of the disabled platform which never happens. (I also have the wrong waistband and had to wait for that to be sorted out, but that is not the reason I stayed) The Saturday for me was all about Muse, and so like I was planning on giving up that front row spot.

So, the next band that I saw was Hollywood Undead. Now, to be fair, I was expecting absolutely nothing from them. I actually thought that they were going to be appalling because I really do not like their music. However, I was nothing if not impressed by this show that they put on. Admittedly, I am not likely to  go out and buy their music, or go and see them again deliberately, but if I end up being stuck watching them I won’t be gutted.

Next up, Parkway Drive. I can’t really say a lot that is good about them. I did not know they were when they come on the stage, and I am unlikely go and look up based on their performance.

Rise Against were on the stage next, and they are absolutely fantastic. I was really looking forward to seeing these again and they certainly did not disappoint. Of course, it was the British summer so by the time though they came on it had been raining for most of the day. They commented that the festival wasn’t a proper festival if it was not rainy and muddy. Will be just glad that it wasn’t cold.

Faith No More followed, and they did so by decking the entire stage out in white and made it look like some kind of church. The look was completed by placing flowers on their altars. They put on a really good show and it was highly enjoyable to watch. Somebody got carried out during it, and even they had to comment on the incident, asking the crowd if they had hurt the guy. I was just thinking that he would tell nobody what song was playing when he got injured. Easy like a Sunday Morning, Street cred, gone.

Then it was the act that I had been waiting for. Muse. They were exactly like I would have expected them to be. If you have never seen them live then I completely urge you to do so because they are one of the best acts that I have ever seen live. They make everything seem like you are in a theatre with their videos, lighting, pyrotechnics, and general storytelling. That when they play everything is completely slick performance, with no flaws. It all ended on an intense high with fireworks. 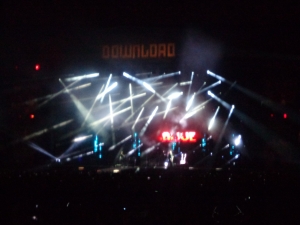 This feeling was slightly dampened by the fact that that then took about an hour (if not more) to get out of the car park!

Sunday rolled round after a night of just rain. So, when we arrived at the festival I knew that it was a high probability that I would see the worst thing that I can think of being in a wheelchair. Straw. This clogs itself around your wheels and prevent you from going anywhere. I realise that I was going to be spending the whole day on the main stage again. This was exceptionally getting because I wanted to go and see Godsmack on the zippo encore stage. Not to be.

Instead of rocking out to Godsmack, I found myself watching Tremonti. I had no idea who these were, and they certainly did not impressed me in the slightest. Maybe it was because I was missing Godsmack, but I just do not think they were any good. Quite what they were doing on the main stage I will never know.

These were followed by BlackBerry Smoke, who were actually incredibly enjoyable. They actually sound very similar to Blackstone Cherry which could well be a deliberate act. Whatever, they were actually very good and I would probably go and see them again

Billy Idol. Yeah, he was absolutely mind blowing and the best act on the stage at that point. It was one of those moments where you really enjoyed something, but then at the back of your mind you realise that you probably shouldn’t. It was definitely one of those moments when we realise just how amazing he was. You complete forgot how old he actually is, until he started talking about 1976! Everybody was singing along with him, and it even stop raining for a few minutes! 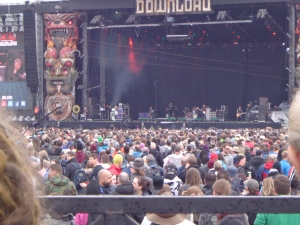 Slash. I am probably going to get myself in all kinds of trouble for this one, but bear in mind that this is just my opinion. Anyway, I do not think it should be featuring Myles Kennedy because he did all the work. I think it should just be Myles Kennedy featuring Slash. I also do not think that he is that good a guitarist. I mean, he definitely was in his day, but that day has passed and now his talents are average at best. (Please don’t send me any death threats!) All in all though, it was a really fun performance, and Myles Kennedy can definitely sing. 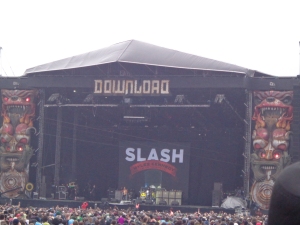 The next ones are hardly worth a mention at all. Motley Crew. These had an absolutely amazing stage show, but they were just no good. One on a few acts I can say had a really good stage performance but no magnetism at all. Not only that, but they managed to come back for three encores when we were all surprised they did one. Maybe not surprised; more mortified!

Then came the act that was going to close the entire festival, Kiss. Now, if I thought that Muse had an impressive stage then I was about to be blown away. They had absolutely everything that you can think of. They were absolutely stunning, showing how you should really perform when you are on the stage. They all looked like they were having a genuine blast up there, and the feeling was carried to the audience. Everybody was having a really good time, what a way to end the festival!

Advertisements
Seasons As My Teacher

Vacation packages savings up to 80%

Pick Me Up Poetry

struggling through one book at a time

How to find a

How to apply, How to become, How to clean, How to treat, How to prevent and how to ?

Travel Advisor For Your Dream Vacations

Daydreaming as a profession

Daydreaming and then, maybe, writing a poem about it. And that's my life.